Iorg at convocation: 'The Gospel marches on' in face of opposition

ONTARIO, Calif. (Sept. 6, 2018) -- Jeff Iorg voiced encouragement to students facing increased opposition to the spread of the Gospel during his President's Convocation message Aug. 30 at Gateway Seminary's main campus in Ontario, Calif. He also welcomed the largest group of new trustees in the seminary's history.

"The rise of opposition, according to the book of Acts, is an opportunity for the church to rise up," Iorg said. "Opposition to the Gospel can catalyze further progress of the Gospel."

Iorg examined external and internal obstructions to the Gospel faced by the early church in five stories found in Acts 3-8. In each case he defined the source of the opposition and the outcome for the Gospel. 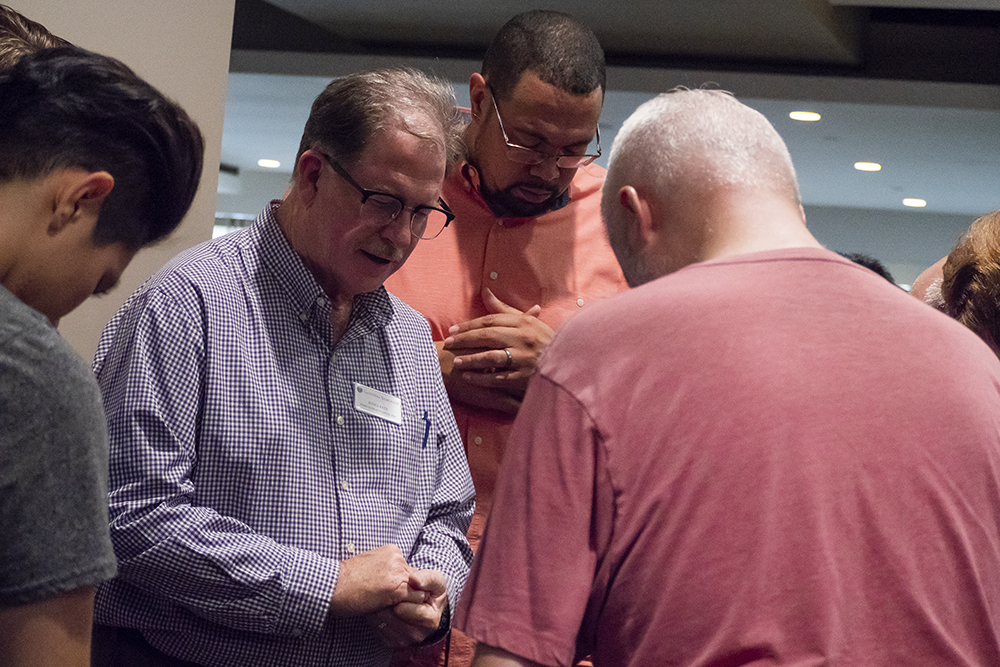 "As the gospel progresses, the external pressure builds and the punishment gets greater, but the Gospel keeps advancing," Iorg said. "The Gospel is always progressing steadily forward."

Across three of these accounts, the Sanhedrin increased the severity of their responses to the early church, first imprisoning the apostles and warning them to stop preaching (Acts 3:1-4:35), then physically beating the apostles (Acts 5:17-42) and finally killing Stephen (Acts 6:8-8:3).

Iorg told students to address external opposition to the Gospel with spiritual conviction and spiritual resources, encompassing the power of the Holy Spirit, the truth of the Word of God and sustaining prayer. He contrasted the Sanhedrin's actions with the internal opposition of leadership failure and organizational dysfunction.

"Leadership failure and organizational dysfunction are in the stories that almost derailed or limited the Gospel's progress in the early days, and it is still happening today," he said.

The first great internal opposition came from leaders Ananias and Sapphira, Iorg said, and it involved two of the three most dangerous pitfalls leaders face (Acts 4:36-5:16). "The unholy trinity of leadership failure is money, sex and power; misuse of those three or any one of those three is what takes down ministry leaders. When that happens, the Gospel is disrupted and limited in impact," he said.

"This is not new. This is not a 21st-century cultural or Southern Baptist Convention problem. The first source of internal opposition to the advance of the Gospel was a leadership failure over money and power."

Iorg called for Gateway's faculty to train students to be leaders who practice accountability and make healthy lifestyle and leadership decisions.

"No leader is above the need for accountability processes that keep him or her in check, and we must model that, we must practice it and we must teach people how to set that up in every place where they lead in the future."

The second internal opposition to the Gospel's advance, Iorg said, was organizational dysfunction (Acts 6:1-7). Because of the early church's rapid growth, widows were being overlooked and "disruption rose in the fellowship and the Gospel was being slowed in its progress," Iorg said. "Notice when leaders create chaos, or church members create chaos, solutions are found and the Gospel keeps progressing.

"We must always be asking ourselves, 'What part of our organization needs to change to facilitate effectiveness in the 21st century?'" Iorg said. "Every time there is opposition, whether it is external or internal, whether it intensifies as the apostles are warned, imprisoned, beaten and killed, or whether the church disruption takes place among the leaders or the members, in every case in Acts there is a resolution so the Gospel kept advancing."

Iorg closed the service by asking attendees to form prayer groups "to call out to God that we would do our part to advance the Gospel in the face of any opposition we will face."