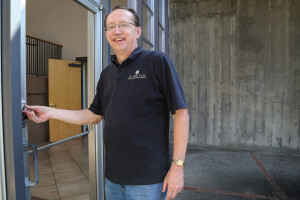 After a ceremonial locking of the doors at 4 p.m., President Jeff Iorg sent out a campus-wide e-mail that read “The Mill Valley campus of Golden Gate Seminary is now closed. We press on!”

Ontario employees will report for work June 20 to prepare the new 150,000-square-foot facility for its official opening on July 5. The first group of students is expected to move into new student housing in late June.

“Based on the overwhelmingly positive first vote on this issue in 2015, we have been preparing for immediate implementation of an affirmative decision if it is made by the messengers in 2016,” Iorg said. “This may make the 2016 convention unique as a new seminary identity likely enters the history of the Southern Baptist Convention.”

Dedication events for the new campus will be held Oct. 5-8.