FREMONT, Calif. (April 10, 2017)—Gateway Seminary dedicated a new campus in the San Francisco Bay Area April 8, fulfilling a promise that the institution would not abandon its presence there.

But the story behind the new facility has two parts: one on the side of the Seminary—formerly known as Golden Gate Baptist Theological Seminary—and the other on the side of a church that was declining but wanted to continue its commitment to missions.

“When we decided the seminary relocation would go forward, one of the most difficult parts of the decision was the feeling we were abandoning the Bay Area,” Iorg said. “We see the need in this area, so leaving was not desirable to us. When we knew we were selling the property in Mill Valley, we also knew we wanted to build a new campus in the Bay Area.” 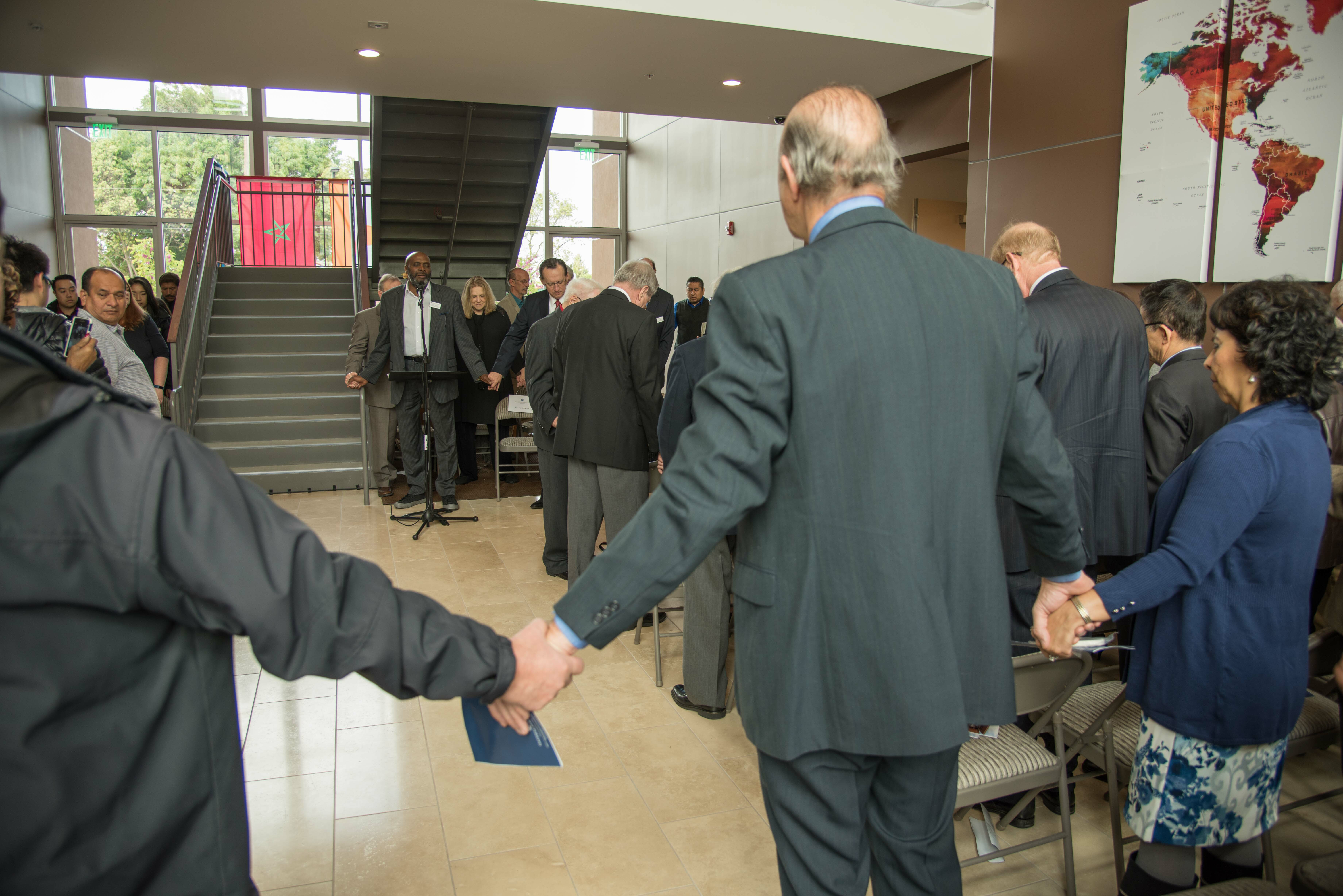 He said that a list of requirements for a new facility included a location in the Fremont area between the 680 and 880 freeways, situated on a major thoroughfare and near a rail transit station. He and other staff members looked at possibilities over a six-month period—but buildings that fit the criteria were very expensive.

One day in October 2014 Iorg’s phone rang, and an area pastor said ‘I wonder if I can talk to you for a moment about the Bay Area campus. I have heard that the Seminary purchased property in Fremont for that purpose.’ Iorg assured him that was not true. The pastor replied, ‘Well, I’m glad to hear that, because our church would like to give you our property.’

When Iorg brought up the property on Google maps, he said, “Looming in front of me was property located between the 680 and 880 freeway on a major thoroughfare, near a rail transit station,” he said. “I asked him ‘are you sure this is the property you’re telling me the church wants to give the Seminary?’ And the pastor replied ‘yes.’”

So Iorg and Gary Groat, vice president for business services, visited the church, inspected the property and then went to lunch to discuss it.

“Gary is a very analytical, realistic person,” Iorg said, “so I asked him—what am I missing? He replied, ‘You’re not missing anything. It’s a miracle.’

“We first heard from the pastor in October and by January, we owned the property, and had the opportunity to develop it to what you see it today. The gift was magnificent: a church that realized that possibly the best use of their resources was in the training of future leaders at a seminary on this property.”

The Rev. Larry Floyd, pastor of Discovery International Church that donated the property valued at $2.9 million, said they were unaware of the Seminary’s side of the story but that it was an example of God knowing both sides and bringing them together for His purpose.

He explained the church began as a mission in 1952, experienced difficulties that temporarily closed it and then it reopened in 1959. The church moved to the Fremont location in the 1960s. Floyd began his role as pastor in 2007.

“As time progressed to about 2009, there was an uneasiness,” he said. “We often prayed ‘God, what are you doing with us here?’ We would grow and then people would leave. At one time, we had someone from every continent in our church, so we changed the name to Discovery International Church. Our desire has always been for missions, but at the time, my wife and I were in our early 60s, and we were some of the younger ones in the church.”

Floyd said they had several leadership meetings, where the question was asked ‘has Golden Gate purchased property in Fremont yet? He would reply ‘I don’t know. I heard they had.’

“Time progressed, and as we were praying, God was making it more and more evident that this is what He wanted us to do. As we looked at statistics on the Southern Baptist Convention website, we found there are still more than 1,400 unreached people groups, and we wanted to make some impact. What were we going to do? We began praying again.”

All along, they thought the Seminary had already purchased property in Fremont. Finally, someone said ‘Why don’t you just call Golden Gate and find out what they plan to do?’ That question precipitated the phone call Floyd made to Dr. Iorg.

“The circumstances that took place were about timing,” Floyd said. “At first we thought we had missed [the window of time], but the timing was such that we knew that this property should be used for His glory.

“When we look back on what we did, we had to consider that most of our people were senior with limited incomes. But now students are going to be graduating each year going out in the world to share the gospel. We couldn’t have done that collectively. But now our church will always be on mission through our gift to the seminary.”