ONTARIO, Calif. (Oct. 7, 2016)—Gateway Seminary wrapped up two years of transition Oct. 5-8 with a series of dedication events that praised God for His blessings on the institution’s recent move.

“Today we celebrate our heritage and stand in awe of God’s miraculous activity through us over the past few years,” said President Jeff Iorg during the Oct. 6 dedication service. “These memories are important to us. But for us, our dreams exceed our memories. Our vision supersedes our heritage. Our longing to experience God’s future is more important than celebrating our legacy in our past.” 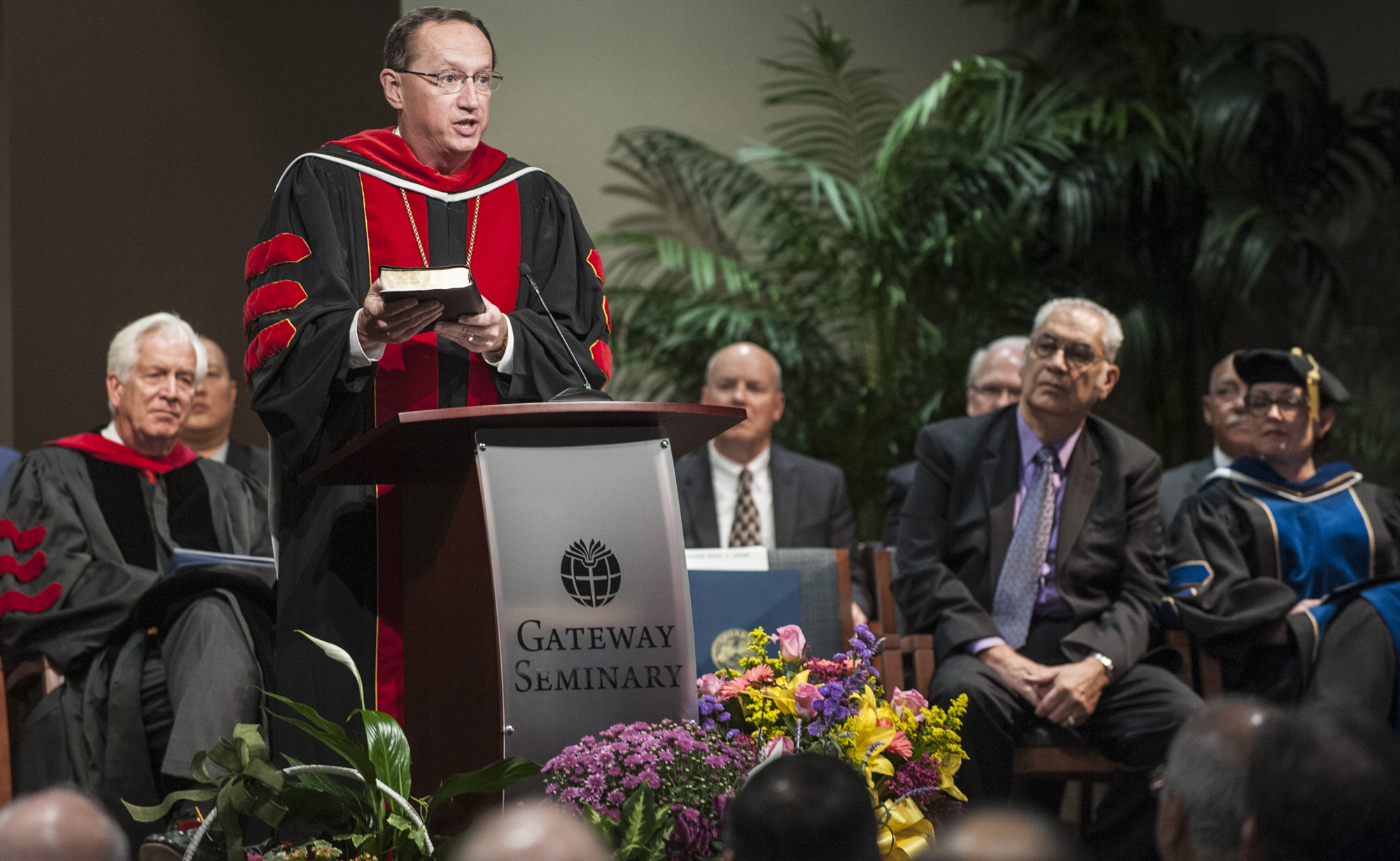 Iorg summarized the conditions that precipitated the Seminary’s move 400 miles to the South.

“From 2009 through 2013, we endured a prolonged political and legal conflict, along with persistent opposition from some in our community to our development plans for our former campus,” he said. “The situation was bleak. We owned a deteriorating campus, in a very challenging location, with significant development restrictions and entrenched community opposition. We were on a trajectory toward closure or worse—a perpetual struggle to preserve our property at the expense of our mission. Frankly, we needed a miracle.”

He said that administrators for several years had interpreted the challenges as barriers to overcome.

“Gradually, God changed our perspective. We came to believe our challenges were not barriers testing our faith, but instead were signposts telling us to go another direction.”

Iorg said God showed His favor during the transition by sending miracles to encourage  the Seminary as it looked toward relocating the main campus and launching a new seminary for the 21st century. For example, the buyer of the Mill Valley property met all the institution’s needs in the conditions of the sale, and the building that was purchased was constructed in 2009 but was left unfinished and unoccupied for five years. The Seminary also received several large financial gifts, some from donors with no previous connection to the school. In addition, the institution came out of the relocation process debt free with $123 million in real estate and endowment assets, up from $32 million just seven years ago. 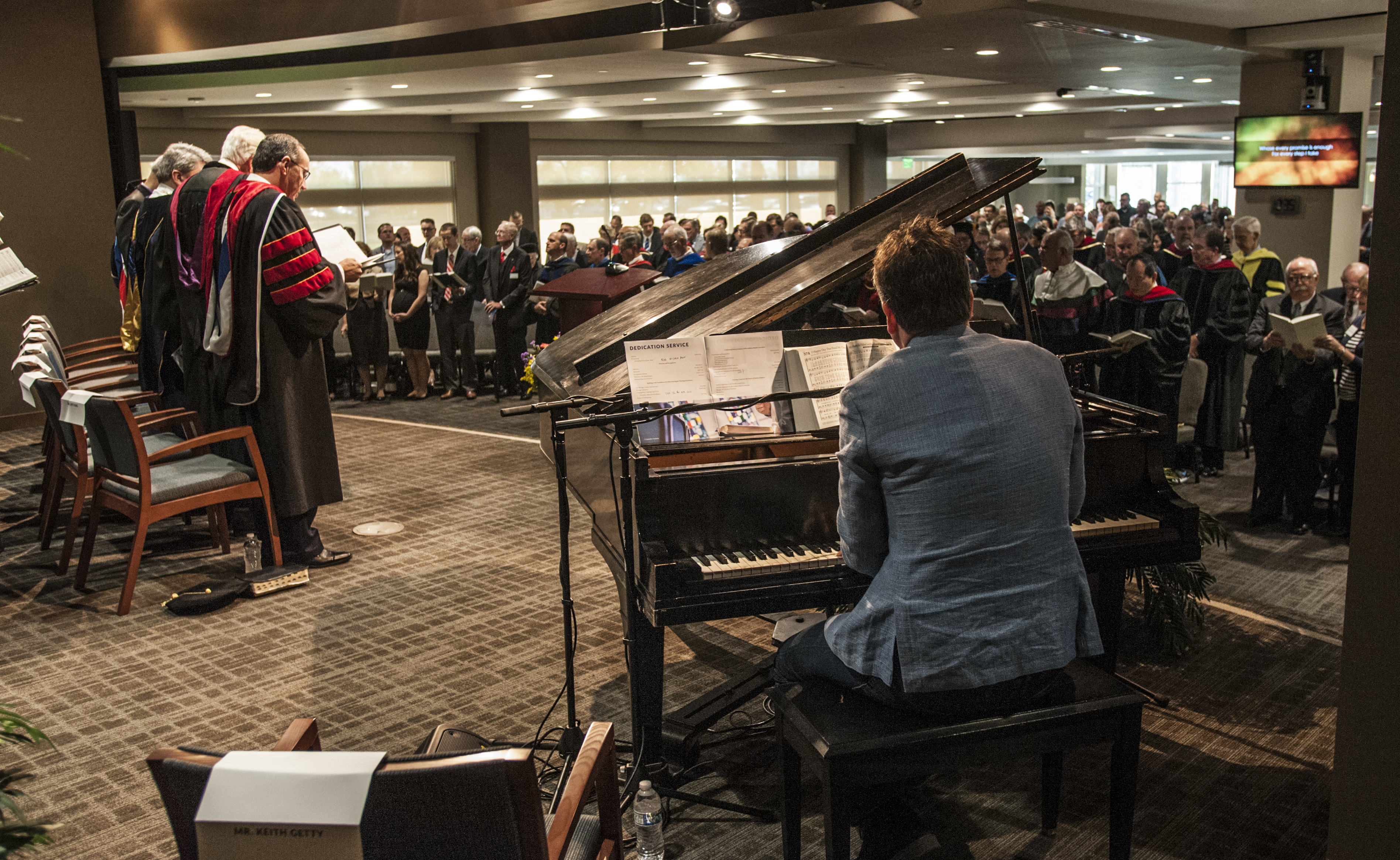 Outlining his vision for the future, Iorg explained why the decision was made to move to Ontario.

“We moved here because Riverside and San Bernardino counties are the two fastest growing counties in the American West. By 2050, the population of these two counties is projected to grow by more than 3 million people. That’s more population growth in these two counties than will occur in any western state, except Arizona, during the same time frame. We established Gateway Seminary where the most people will be moving and living. We are in the perfect place for our ministry-immersion approach to theological education.”

Iorg reminded the audience that all the Seminary needed to fulfill its mission of shaping leaders to advance God’s kingdom was a chapel, classrooms, meeting room, a library and offices—so that’s all that was built.

He challenged other Southern Baptist entities to “stop borrowing money to build monuments to human ego and become more serious about investing every dollar possible in fulfilling the Great Commission. When billions of people have not yet even heard the name of Jesus, we must find ways to model capital frugality and spend more money on getting the gospel around the world.”

Bill Moffit, chairman of the Gateway Seminary board of trustees, thanked staff, faculty and students on behalf of the board for the sacrifices they made to make the move possible.

“They took on the running of a seminary at full speed with the added complexities of moving the seminary 400 miles,” he said. “What has happened is truly unprecedented.”

David Johnson, executive director for the Arizona Southern Baptist Convention, said that the Seminary—from its inception more than 70 years ago—has been known as a missions seminary.

“Missions has been its very DNA,” he said. “It began in a missions setting and was driven to take theological education out to those places it was needed. It responded to the needs of churches to train leaders who would help them reach people with the gospel. May this seminary continue to be a gateway for theological education.”

“We recognize how significant it is to have a Great Commission seminary, a global seminary, in the West,” he said. “This school has brought a paradigm shift. It has shown us how to be a school in the midst of a very difficult culture and how to do it well. God is at work in a powerful way. You set an example for us, and we have watched and learned.”

Iorg presented the Harold K. Graves Award to Gary Groat, vice president for strategic services, for his work in handling the construction details for both the Ontario and Fremont campuses.

The Deere Lectures later that afternoon featured Craig A. Evans, Distinguished Professor of Christian Origins and dean of the School of Christian Thought at Houston Baptist University. Evans spoke on the topic “Ancient Bibliography and the Reliability of the Gospels.”

In the evening, 500 people attended the Gateway Gala, a celebration event at the Ontario Convention Center that included dinner and a concert by Keith and Kristyn Getty, hymn writers and entertainers from Northern Ireland. It was the largest event ever hosted by the Seminary.

Members of local churches and the surrounding community attended the Gateway Festival on the Seminary grounds on Oct. 8. Activities included a climbing wall, bungee jumping, illusion performances, a food truck and building tours.

Video of the dedication service and the Deere Lectures are available on our website.